Opening Mainstage Show to be Announced

A few days ago we announced our 2009-2010 Anniversary season and included Chicago as our opening show in the Mainstage Theatre running September 25-October 25, 2009. Yesterday we received notification that we would not be granted the rights to the production. We promise to fill this slot with an equally terrific musical production to complement the rest of the block buster 85th Anniversary Season we have in store for you. As soon as those decisions have been made it will be here on the blog.
Posted by Omaha Community Playhouse at Friday, February 27, 2009 No comments:

The word is out!! The 2009-2010 85th Anniversary Season at the Omaha Community Playhouse was revealed February 24 at an exclusive announcement party. Long time subscribers, donors, sponsors, advertisers and volunteers gathered for light hors d'oeuvres and drinks in the Owen Lobby and moved to the Mainstage Theatre to hear Artistic Director, Carl Beck, and Associate Director, Susan Baer-Collins, give a synopsis of each production included in the upcoming season. The presentation included a monologue from Quilters, performed by Christina Rohling, and a musical medley from each of the mainstage musicals performed by Melanie Walters, Bailey Carlson, Tim Abou-Nasr, and Jim McKain and accompanied by Playhouse Musical Director, James Boggess. Below is the complete list of the productions, dates and descriptions of the 2009-2010 Season at the Omaha Community Playhouse.

Quilters by Molly Newman and Barbara Damashek
August 21-September 27, 2009 in the Howard Drew Theatre
Quilters celebrates the women of the prairie in the early 19th century and the place that quilting holds in American society. The play in and of itself is a quilt. It is a series of snapshots of the lives of American women. Quilters’ Broadway run was nominated for six Tony Awards including Best Musical, Best Book and Best Score.
sponsored by Ron and Teri Quinn
orchestra sponsor BERNINA Sewing Centers–Omaha, NE

Joseph And The Amazing Technicolor Dreamcoat
Music by Andrew Lloyd Webber
Lyrics by Tim Rice
September 25–October 25, 2009
The saga of Joseph and his coat of many colors comes to vibrant life in this delightful musical parable. It is a terrific high energy event in which Joseph endures a series of adventures as his spirit and humanity are continually challenged. Set to an engaging cornucopia of musical styles, from country-western and calypso to bubble gum pop and rock ’n’ roll. This Old Testament tale emerges both timely and timeless.
sponsored by HDR and Peter Kiewit Sons’, Inc.

October 23–November 22, 2009 in the Howard Drew Theatre
Almost, Maine is a collection of nine playlets. Set in Northern Maine and crammed with quirky characters this midwinter nights dream is sprinkled with a flurry of bittersweet magic realism. Warm, charming and endearing.
sponsored in part by Enterprise Bank

Yesterday And Today An Interactive Beatles Experience Special Event
Featuring Billy McGuigan Music Director Rick Avard © 2007 By Rave On Productions
December 4–31, 2009
Billy McGuigan of Rave On! fame returns with his amazing musical tribute to music of The Beatles. Rekindle the spirit of yesterday through the music of the world’s most popular band. Yesterday and Today will have you twisting and shouting in the aisles while singing every word to the songs you know and love.
sponsored by Security National Bank

Cheaper By the Dozen Based upon the book by Frank B. Gilbreth Jr. and Ernestine Gilbreth Carey Dramatized by Christopher Sergel
January 22–February 14, 2010 in the Mainstage Theatre
Cheaper By the Dozen follows the family life of the Gilbreths in the 1920’s as they cope with and ultimately begin to rebel against the totalitarian discipline of their father, who attempts to make their household operate much like the factory he supervises. The play, in addition to many comic moments, also includes a valuable lesson about family ties. Full of heartfelt fun and promise.

Death of a Salesman by Arthur Miller
February 19–March 21, 2010 in the Howard Drew Theatre
For Willy Loman there is only one American Dream. After 36 years on the road in its pursuit, the traveling salesman, haunted by missed opportunities and an uncertain future must come to terms with a lifetime of self-deception that has distorted his dream into an American tragedy. A Pulitzer Prize and Tony Award-Winning Masterpiece.

All Shook Up Book by Joe DiPietro
March 5–April 3, 2010 in the Mainstage Theatre

All Shook Up is a jukebox musical featuring the music of the classic rock star Elvis Presley. The story is based on the plot of William Shakespeare’s Twelfth Night. The song list consists of every popular Elvis song plus more and more. Time: a 24 hour period, during the summer of 1955. Place: a small you-never-heard-of-it town somewhere in the Midwest.

Mister Roberts By Thomas Heggen and Joshua Logan
April 16–May 9, 2010 in the Mainstage Theatre
One of the outstanding successes of the modern theatre. This rowdy, realistic saga of a group of American sailors aboard a Navy cargo vessel in the Pacific finds the crew suffering from that deadly boredom that is part of the routine of war. This Broadway hit is what brought the Playhouse’s own Henry Fonda back to acting after an eight-year absence. Fonda played the lead role "Mister Roberts." One of the finest service comedies ever performed.
sponsored by U.S. Bank

Awesome 80’s Prom by Ken Davenport & the Class of ‘89
April 30–May 30, 2010 in the Howard Drew Theatre
The Awesome 80’s Prom is a brand new blast-from-the-past party in the style of Tony ‘n Tina’s Wedding. Set at a High School Senior Prom in 1989, all of the characters from your favorite 80’s movies are there. From the captain of the football team to the foreign exchange student, and the geek to the hottie head cheerleader, they are all competing for Prom King and Queen. This show is interactive fun for all audience members.

Fiddler on the Roof Music by Jerry Bock Lyrics by Sheldon Harnick Book by Joseph Stein
Based on Tevye and His Daughters by Sholem Aleichem
May 28–June 27, 2010 in the Mainstage Theatre
Fiddler on the Roof is a timeless classic filled with a rousing heartwarming score which includes "Tradition," "Matchmaker, Matchmaker," "If I Were a Rich Man" and "Sunrise Sunset." It is the story of Tevye, the father of five daughters, and his attempts to maintain his family and religious traditions while outside influences encroach upon their lives.
View the available season subscription packages to see how much money you can save over purchasing single tickets!
Posted by Omaha Community Playhouse at Wednesday, February 25, 2009 1 comment: 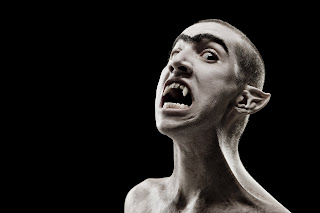 Tim Abou-Nasr is Bat Boy- Photo by Andrew Marinkovich
Okay, I'm probably going on and on about this show, but I attended the Preview Performance on Thursday night and I am still laughing about it! The leads are fantastic, of course, but the show features an ensemble cast that are hilarious in their own right. I will be seeing it multiple times so I can watch different actors to see their expressions and listen more closely to hear some of the lyrics and lines I missed because I was laughing so hard.
There were a few mishaps in what was technically the final rehearsal, but nothing that couldn't be overlooked. Kudos to the musicians and cast that didn't flinch when a too hot spot exploded towards the end of a song. For safety reasons the show was stopped to clean up the glass and ensure no one was hurt. The audience adjusted just fine into the next scene when the show was resumed, however, and you could hear the excited chatter about what we'd seen so far during the house-lights-up-clean-up.
The performance was a benefit for Playhouse staff member and friend of the Omaha Theatre community, Lara Marsh. We raised almost $2,300 through ticket purchases, a portion of the bar tab, and the generosity of those in the audience last night. Thanks to all for helping us get closer to our goal of $100,000 for Lara's double lung transplant. I'm telling you now--buy your tickets for Bat Boy- The Musical. This is going to be a smash hit and tickets will be hard to come by at the end of the run!
Posted by Omaha Community Playhouse at Saturday, February 21, 2009 No comments:

That's right--Bat Boy can be spotted at the Playhouse in just one week! I've heard some rumblings of how the show opens and, trust me, it will be cool. The show officially opens on February 20, but we do have a special Preview Performance on Thursday, February 19. Check out the previous postings for details.

Get your tickets today at http://www.omahaplayhouse.com/performances.aspx?perfno=975
Posted by Omaha Community Playhouse at Friday, February 13, 2009 No comments:

What do red plaid, Pat Bundy-esque hair, and Scottie dogs have in common? How about viciously quick costume changes and dirty body makeup? Anyone who sees Bat Boy-The Musical between February 20 and March 29, will know the answers. Heck, you'll probably walk away with some questions you'd like to ask. Go ahead--ask away! We'll do our best to answer them.
Posted by Omaha Community Playhouse at Thursday, February 05, 2009 No comments:

The Omaha Community Playhouse has designated the February 19, preview performance of Bat Boy- The Musical as a benefit for staff member Lara Marsh. A Playhouse volunteer since 1995 and staff member since 2000, Lara is one of almost 30,000 Americans living with Cystic Fibrosis. Doctors at the Nebraska Medical Center in Omaha have recommended a double lung transplant to save her life and a team of volunteers is determined to help her raise the needed $100,000.