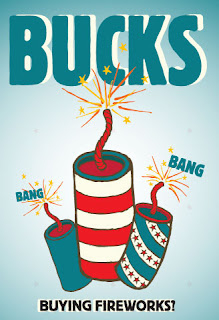 Are you looking for a way to illuminate your Fourth of July holiday? Support the Omaha Community Playhouse by purchasing fireworks!

The city of Omaha is allowing the sales of fireworks again this year within city limits with sales benefiting a sponsoring nonprofit organization.

Crazy Cracker Fireworks stand at 840 Saddle Creek Rd. (located in the No Frills Supermarket parking lot) will benefit the OCP. A portion of proceeds goes directly to the Omaha Community Playhouse!

Stock up on your favorite fireworks and support the Omaha Community Playhouse at the 840 Saddle Creek Rd. location! 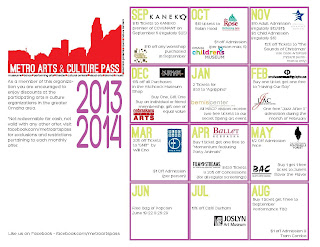 Enjoy the arts with a Metro Arts and Culture Pass! If you are a season subscriber to the Omaha Community Playhouse, in the month of June, you can receive a free bag of popcorn at Nebraska Shakespeare Festival, June 19-22 and 26-29.

For more information about the Metro Arts Pass, contact the sales and community relations manager at jroberts@omahaplayhouse.com or (402) 553-4890, ext. 147.
Posted by Omaha Community Playhouse at Friday, May 30, 2014 No comments:

21 & Over presents 'Bengal Tiger at the Baghdad Zoo'

Monday, June 16, 2014
7:30 p.m.
Omaha Community Playhouse
Free and open to the public, with an opportunity for donations. No tickets or reservations are necessary.

Bengal Tiger at the Baghdad Zoo, by Rajiv Joseph


In the war-torn city of Baghdad, during the first chaotic days of the American invasion, two young marines, an Iraqi gardener-turned-translator, the ghost of Saddam Hussein's son and a world-weary but ravenous tiger prowl the streets. Rajiv Joseph's powerful 2010 Pulitzer finalist is a brutal search for meaning, forgiveness and redemption that exposes humanity's true and often harrowing nature.

The 21 & Over productions are intended for a mature audience and discretion is advised. For more information on 21 & Over and other OCP alternative programs, contact Amy Lane, Resident Director, at alane@omahaplayhouse.com or (402) 553-4890, ext. 164.

Posted by Omaha Community Playhouse at Friday, May 30, 2014 No comments:


When you think of American pop culture a certain list of things come to mind high school prom, Coca-Cola, that big block of Velveeta cheese, maybe even your crazy uncle trying to not only feed you SPAM, but convince you it tastes good! The list goes on and on of iconic items within our consumer society, but for many there is one that stands out among the rest…Wonder Bread. Rather, it’s driving down the highway smiling at the semi truck next to you or thinking about that sandwich your mom made you every day for lunch in elementary school with the crust cut off – Wonder Bread it is engrained in our every day American lifestyle.

Omaha native, Pat Hazell (who ShowTime named one of the five funniest people in America), is coming to the Omaha Community Playhouse with his rendition of The Wonder Bread Years! Pat says, “I can’t wait to be back in Nebraska speaking my native tongue,” as he shared a little insight on his memories and favorite things about the “corn state.” 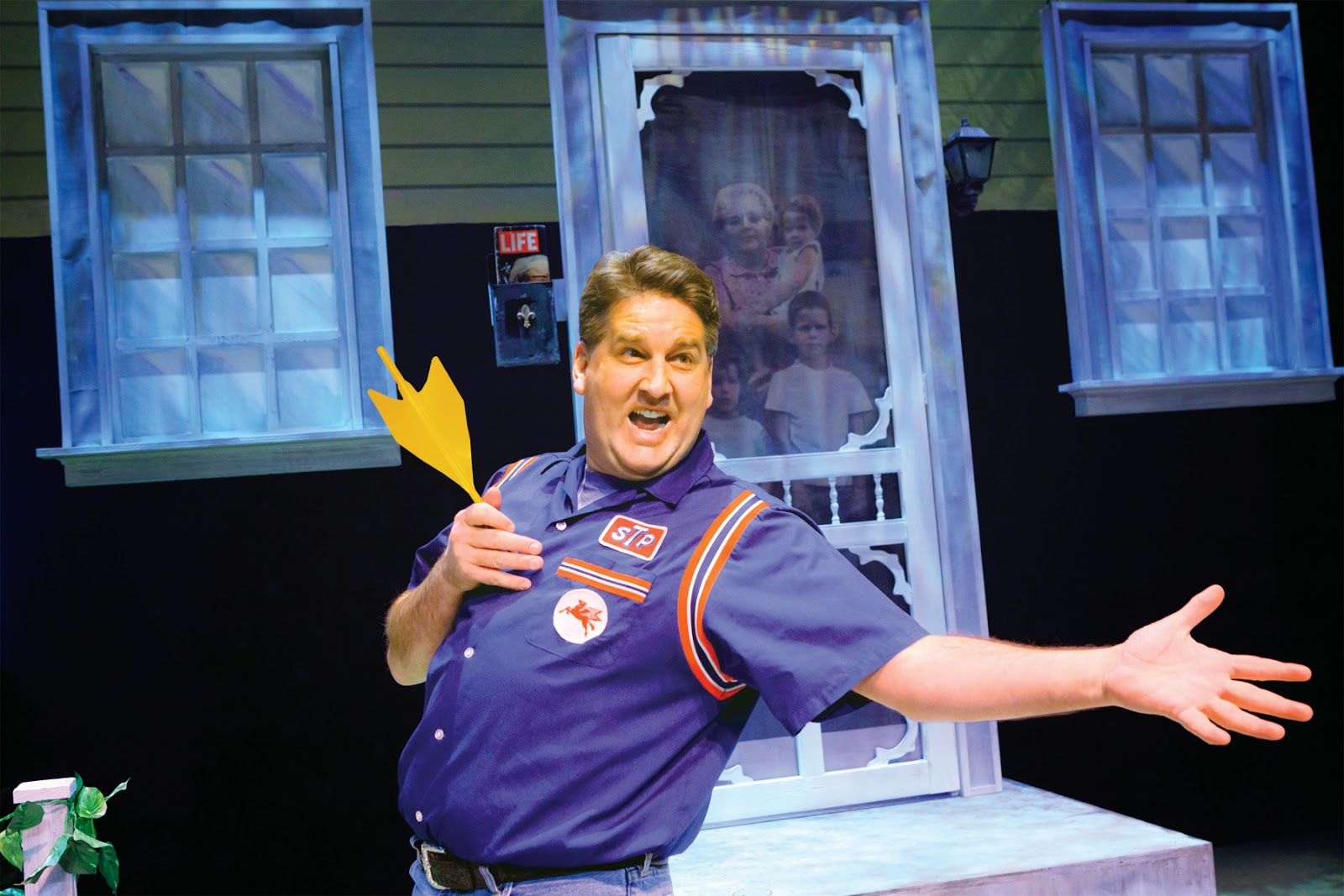 How have your Omaha roots shaped your show?
I think being from Omaha has inspired to have more heart in my humor than you might see on the coasts. It is more nostalgic and playful because I take a positive approach. I like the quirkiness of the Midwest.

Are there any places you're looking forward to visiting while you're "home?"
I am always good for a Goodrich Malt, a Runza and some time in the Old Market. This trip I will take my kids to the Desert Dome, the College World Series and Mama's Pizza.

What was your favorite part about working with Susie and Carl?
A Few Good Men was directed by Carl Beck and he offered me the challenge of a great leading role written by Aaron Sorkin that required an actor rather than a comedian. It was a tremendous experience since I had always starred in things that I had written tailored to my voice and point of view. Carl also directed the Bunk Bed Brothers which he and Susie championed into the Playhouse and that jumpstarted my career as a playwright. Susie has always been an advocate for my work. In the world of creating original works you can not underestimate the value of Arts Angels that encourage you to keep going. 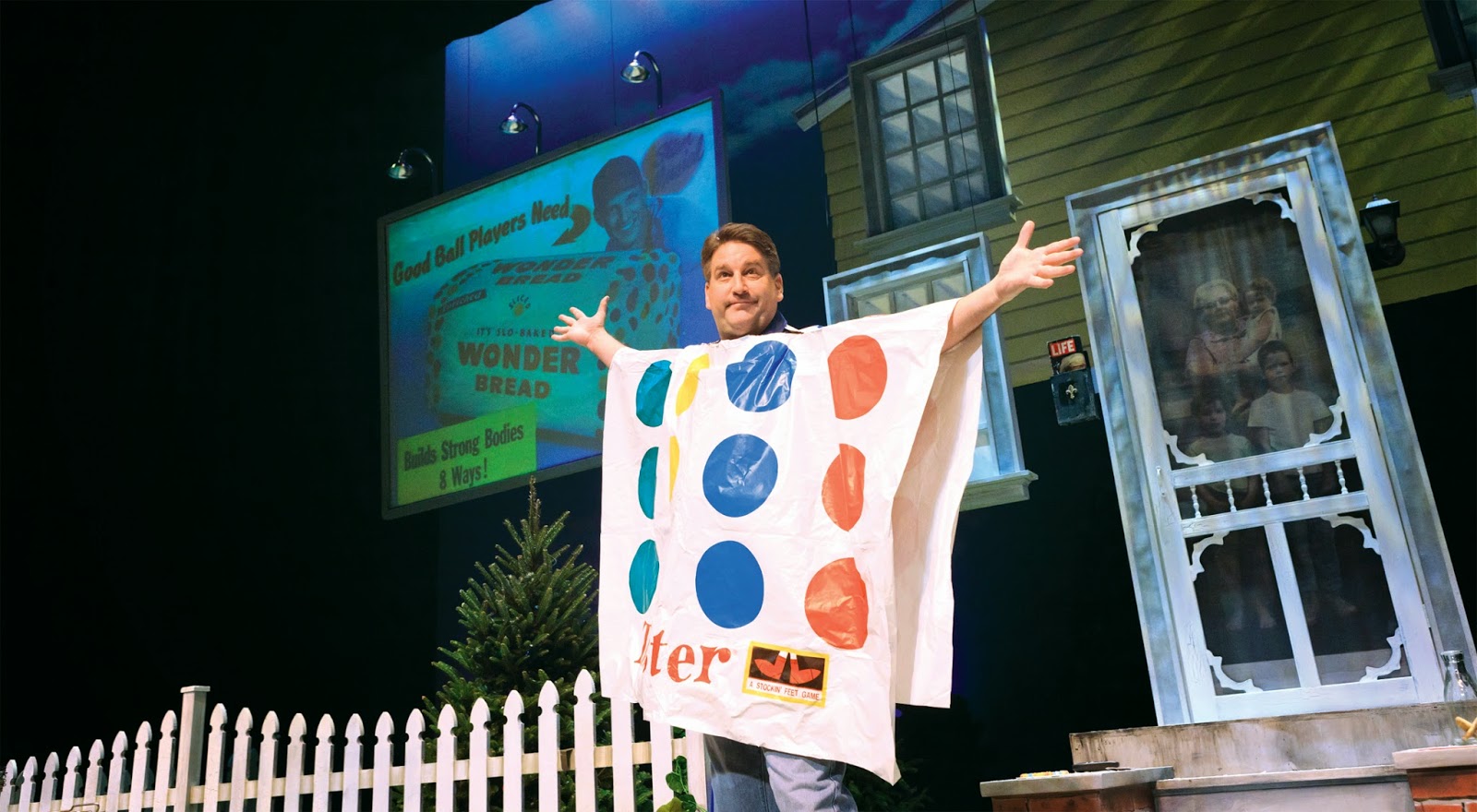 What's your best memory from living here?
I am not sure I could specify a single memory but weekend nights at the Golden Spike Drive-in, Dance Nights outdoors at Peony Park, summer swim days at Cryer Pool, taking in a new show at The Playhouse, street performing in the old market and junkets to Nebraska City for apples are all worth noting.

What's your favorite part of the show?
I really like doing the family slide show. It is warm, funny and proves that all the stories I am telling during the show are real. It authenticates the piece and allows the audience to see a reflection of their own family road trips and holidays, which makes them realize we have more in common than we have differences.

Out of all of your accomplishments, which one stands out to you the most and why?
In life, it is the birth of my sons. On TV, it was doing the Tonight Show with Johnny Carson, which is like making the Olympic team for a comedian. Then being a writer of Seinfeld and then creating my own sitcom American Pie for NBC based on my original play Bunk Bed Brothers that had its early development at the Playhouse.

A few of his other writing credits include Seinfeld, American Pie, The New Adventures of Superman and Grounded For Life. With over 25 years of experience throughout the business, this is a show you’re not going to want to miss! In “A fast paced salute to the baby boomer generation,” we take an entertaining journey with Pat as he embarks down memory lane with tons of laughs along the way! His one-man show walks the line of stand-up comedy, reminding us all to stop and enjoy the little things. Laugh until you cry, and then laugh some more with us here at the Omaha Community Playhouse.

To purchase tickets, or for more information, call (402) 553-0800, or visit the Box Office located in the southeast corner of the Omaha Community Playhouse at 6915 Cass St. or click here.

Story by Kelsey Nutt
Posted by Omaha Community Playhouse at Thursday, May 29, 2014 No comments:

Puttin’ on the Ritz in Transylvania


They say that the clothes do not make the man. But when it comes to theatre, the costumes definitely make the man…or the monster in the case of Young Frankenstein. Costumes at the Omaha Community Playhouse are often praised and revered, but rarely do audience members get to hear from the masterminds behind the designs. Lydia Dawson, costume designer of Young Frankenstein, gives an insider’s look into the world of Transylvania fashion.

Inspiration – from the screen to the stage
Plays are commonly based off of movies and vice versa. In the instance of Young Frankenstein, the Mel Brooks’ masterpiece was on the big screen before the Great White Way.

“It’s harder designing costumes for a musical based on a movie because the audience is going to have expectations of what some of the characters are supposed to look like,” said Lydia. “You want to stay true to the original since it’s what people know and love but you also want to make the production your own design. The main characters like Frederick, Inga, Frau and Kemp I kept fairly close to their movie counterparts. The other characters, like Ziggy, Elizabeth and all the different ensemble characters, I pulled from various research I have been collecting for about a year now. I based the villagers off Romanian villagers but I also used different cultures for inspiration as well, such as Indian. Elizabeth’s entourage members were based off existing 1930s garments and patterns and photos of actual salon workers from the 30s. Inspiration for Inga’s ‘Puttin’ On the Ritz’ costume comes directly from an existing garment from the 30s, along with a period trim technique used during the depression.”
Ideas come ALIVE!
It took 15 people and hundreds of hours since April to create the approximately 150 costumes for the show. However, Lydia began working on the show long before April.

“I make a spreadsheet (we call it a costume plot) of which character is in which scene,” said Lydia. “This helps me keep track of each of the actors and their costume needs. After I have my costume plot, I start to gather research. I actually began collecting research a year ago when I first found out I’d be designing Young Frankenstein. Once I have my research, I can start my renderings, which are like blueprints for the costume shop to build the costumes from. Once the actors are cast, we can get to work cutting and sewing and building all the various costumes.”

Monstrous Challenges
Every show comes with its own unique set of challenges. Costume challenges for Young Frankenstein range from quick changes to prosthetics to tap dancing monsters.

“Fast changes were something we’ve paid a lot of attention to from the beginning for this production,” said Lydia “The first act is full of lightning fast changes in location and that meant the actors had mere seconds to go from one character to another. We have quick-rigged a majority of the costumes so that we can easily pull off and put on their shirts, pants, lab coats, etc. We also have an amazing Wardrobe Supervisor in Sarah Schnitzer that makes all those crazy fast changes happen.

“[Ryan Pivonka who plays the monster] wears a forehead prosthetic plus several other smaller pieces,” said Lydia. “We spray the makeup on Ryan’s entire head plus his neck, his hands and up his arms.  We’re using a special makeup formulated for the airbrush that will (hopefully) not sweat off as Ryan lumbers and dances across the stage.

“The craftsperson who crafted the monster masks and boots, Christianne Bakewell, had to deal with a few technical problems as rehearsals went on,” said Lydia. “The monster boots that the ensemble wear during ‘Puttin’ on the Ritz’ are actually slipcovers that fit over their tap shoes to resemble the monster’s tall boots. They’re made out of a material called Warbla which we also used during last year’s The Wizard of Oz for the Tin Man’s costume. It involves heating up a plastic-like material and then molding it into the shape you want. She molded it into the shape of the boot and then attached Velcro to both the Warbla and the tap shoe so that they could easily put them on and off. She also created black spandex slipcovers to fit over the Warbla shell so that it would look like the actual boots. As rehearsals went on and the actor’s began rehearsing with their tap shoes and the slipcovers, issues would come up but Christianne was able to troubleshoot the problems as they came up.”
After the Final Bow
After Young Frankenstein closes, the costumes will be washed and dry cleaned and then stored at our costume storage facility. The costumes may be used again in future productions or possibly even rented by another theatre that is producing the show. Even after the costumes are put away, Lydia will no doubt remember her favorite pieces.

“I really love the horses; our craftsperson Trish Place did an amazing job of taking a couple of cheap rubber horse masks and making them look really extraordinary and professional,” said Lydia. “I also love Elizabeth’s Puttin’ On the Ritz and Deep Love costumes. The silver sequins were hard to cut and even harder for my stitchers to sew but the end result is definitely worth it.”