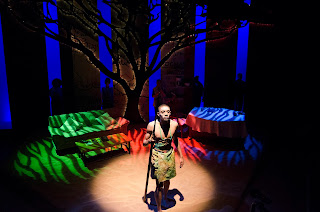 An Opinion of Lost Boy Found in Whole Foods

One of the most important aspects to theater, in our opinion, is not just entertainment, but enlightenment as well.  When a play or musical can not only transport you from your world but also educate, something special has been accomplished.


From the moment the lights cast a soft glow on the character Gabriel in Lost Boy Found in Whole Foods, we were all in.  The softly spoken, smiling young man slicing papaya (with a machete) intrigued us as he began to make parallels between the fruit and the sun and his philosophy of hope.  Yet his underlying umbrage cast its shadow as the scene ended and the play began its course.


Lara Marsh’s exceptional direction gave us a strong story that raised many questions relevant to who we are and where we are in America.  This story of a young Sudanese refugee, Gabriel, gently unfolds and gives us much to think about.  Gabriel had escaped from the violence and war in his home country at the age of six.  Separated from his family and with hardships unimaginable for us, he eventually finds his way to Pittsburgh where he works joyfully in a Whole Foods store.


Christine, a newly divorced mother with a difficult teenage daughter, comes to befriend Gabriel and like many of us…has a desire to help him.  This play makes us ask ourselves so many questions.  What is charity anyway?  When you help someone how far do you go?  Do you help until the help is no longer needed?  Or until you no longer have time for that?  Is help “throwing money” at a project?  Or is it understanding, for example, that anyone undergoing this type of horrific experience as a child will need so much more for a long time?


Where does the resentment in our country come from regarding refugees, this country that was formed from refugees?  For some African Americans it has to do with help for Africans but little help for the ones that help to build this country and still wallow in poverty and discrimination.  Or it could be the fear of jobs and a piece of the American Pie getting smaller for those of privilege?  These are the questions we must answer.


The beautifully designed set mirrors everything from a store to a home to an office and to a desert.  Is that carpet?  Is that sand?  Once again OCP has conceived a creative yet practical use of this space.


Justice Jamal Jones is perfect as the young Gabriel, his smile is fetching and his fear and anger are credibly portrayed.  You truly feel for this character.  We are anxious to see him in more productions. Christine, played by Julie Fitzgerald Ryan, does an excellent job of playing the divorced mother that raises these questions through the course of the play.  Her take on Christine is strong.  Victoria Luther is very good at being a confused, bratty, self-absorbed teenager that learns life lessons very well.  Anthony Holmes as Gabriel’s Sudanese friend shows us a powerful performance as a strong, somewhat disturbed, passionate man.  Rusheaá Smith-Turner gives us a bright spot in a play that is wracked with true emotion.  Her portrayal of an all knowing, manipulative yet in-your-face social worker is very convincing.  Mark Kocsis, as Michael Dolan, also gave us an honest performance as a frustrated social worker that sees the futility of continuing this work.


We highly recommend Lost Boy Found in Whole Foods to those who love a thought provoking presentation and live to challenge themselves.

Posted by Omaha Community Playhouse at Tuesday, May 17, 2016 No comments: