What to know before you see the show: details from the production's creators at dog & pony dc 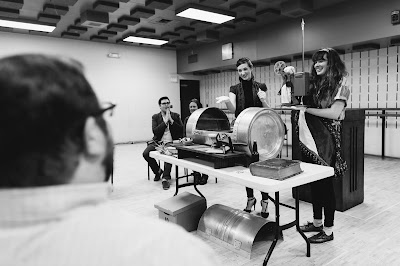 The Story Behind Beertown’s Quinquennial:
Beertown’s Time Capsule was originally part of the opening celebration of Beertown’s newly built City Hall in 1895, to be unearthed 100 years later. Included was Aloysius P.  Thompson’s revolver, which he claimed he brought with him from New York. By 1904, it was suspected that the late Richard Thompson (Aloysius’ son) used the gun in the 1895 murder of Rhys Bramblethorpe’s chambermaid. The Time Capsule was unearthed and the gun fingerprinted in 1905; that same morning, Aloysius drowned himself in the Thakawaki River and fingerprinting confirmed Richard’s guilt. Aloysius’ suicide note replaced the gun in the capsule, which was then re-interred, as a reminder that history should occasionally be reexamined in order to better understand the truth. With the flood of 1908, the time capsule was again unearthed and repaired for water damage. Beertonians agreed the capsule’s contents should be re-examined every five years, in order to preserve the most accurate and complete spirit of Beertown. 1915 marked the first official Quinquennial celebration; 2015 marks the twentieth.

Wait: is Beertown a real place? Can I go visit?
Beertown is not a real town. When dog & pony dc created the town and its history, we plotted out pivotal moments in American history over the past 150 years and then developed the back-story of this small town and its inhabitants. The Thakawaki are a real native indigenous tribe; Kawanii of the Thakawaki is not. Events like New Beers Day are 100% real; though they seem made up. And, of course, McSorley’s Ale House is a New York institution, but two brewers named Bramblethorpe and Thompson never existed.

We created a website, VisitBeertown.com, which served as a repository for all the history we developed that never fit into the Beertown. It came out of our desire to surround the show with a “rich dramaturgical environment.” All the people, businesses and events were created based on research of small towns.

The Origins of Beertown...
In the summer of 2010, we were wrapping up two projects: Courage, a “NASCAR-punk, political theatre revival” adaptation of Brecht’s Mother Courage and Separated at Birth, a clown show exploring missed connections in public-transportation stations. Rachel (directing Courage and performing in SAB) and Wyckham (performing in Courage and directing SAB) frequently found themselves in conversation about the formation, preservation and deterioration of communities.

Around that same time, the company decided our next production should be creating through a consensus-based process. Topic and approach seemed perfectly in sync.

So in October 2010, an ensemble of 14 artists embarked on a devising journey starting with two books--Winesburg, OH by Sherwood Anderson and Everything is Illuminated by Jonathan Safran Foer--and the question “What does it mean to be American?” 16 months later, we premiered Beertown, having added three more artists to our community and expanded our sources of inspiration to include episodes of NPR’s Radiolab and This American Life, Studs Terkel interviews, WPA projects, Our Town, census data, and maps. Lots and lots of maps.

What is the balance of script to improv for Beertown?
Beertown is about 60% scripted. The script is a little over 40-pages long and “act two” consists of less than nine pages. (Half of which is the antecedent “Thesis Statement.”) Led by our “audience integration” principle, we want the audience to world-build and story-build Beertown with us. As a result, we can only script or plan ahead so much or it becomes disingenuous. Improv shows are traditionally created in front of an audience but not in partnership with them. d&pdc walks this fine line between scripted and improvised, and spends considerable time working on how to use the scripted parts to engage the audience in improv-scripting Beertown at every performance.

How complex is that?
Uh, it’s crazy detailed and ungainly. When we built the show, we hadn’t considered a life for it past 2011. The history and timeline was shaped around the quinquennial occurring every five years, starting in 1911 and occurring on the “1s and 6s.” We’ve had to alter history every calendar year since then, so the quinquennial occurred on the “2s and 7s” and the “3s and 8s,” and now occurs on the “4s and 9s.” It is vital to the success of the show, the ability to integrate audiences into Beertown, that it always take place in the present. It’s that first gesture of authenticity that starts their on-boarding to become Beertonians.

Do you have plants in the audience?
Nope. But it always seems to be the complete strangers accused of being shills, not spouses or friends of the family.

What happens if audience members make up new stories about Beertown? Do you ever keep them as permanent parts of the show?
Sometimes. Each performance is its own Beertown, its own unique community. We seek to world-build that community each night with the specific audience that’s there. But just as much as we fill in Beertown history as needed, so does the audience. More importantly, every show we learn from the audience new or nuanced ways of arguing for or against the artifacts. Similar points are raised show to show, but there’s always something special that comes out.

How much has Beertown changed from its first inception? Will the show ever be “done?”


Beertown’s catch phrase is “creating community and revising its history, nightly.” It would seem disingenuous if this was not 100% true. The show performed at Omaha Community Playhouse has material that hasn’t changed since we workshopped the show in June 2011. It also has material written by Omaha artists specifically for this production. We are rigorous in our craft and strive to have our work reflect our growing understanding of the art form and the world. 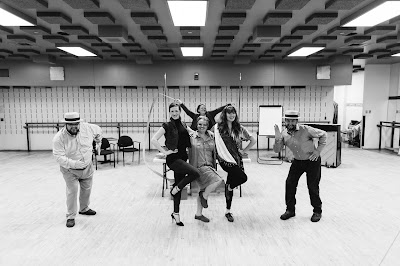 Posted by Omaha Community Playhouse at Thursday, October 01, 2015 No comments: