Fiddler on the Roof

The Personal Connection to Fiddler on the Roof

Set in Tsarist Russia in 1905, Fiddler on the Roof is based on Tevye and His Daughters and other tales by Sholem Aleichem. The story centers on Tevye, the father of five daughters, and his attempts to maintain his family and religious traditions while outside influences encroach upon their lives. He must cope with both the strong-willed actions of his three older daughters and with the edict of the Tsar that evicts the Jews from their village.

Several cast members of the Playhouse’s upcoming production of Fiddler on the Roof have their own traditions and personal connections with the show. Gary Bosanek, who plays Lazar Wolf, has been captivated with the production since he saw the movie with his family at the age of 12. This production marks his eighth on stage, including the 1993 production at the Playhouse, and he has costume designed another four productions!

This is the fourth time Leanne Carlson has done a production of Fiddler on the Roof and the second in the role of Hodel. The first time Leanne played Hodel she was in high school and she is enjoying using her life experience since then to bring a new perspective to the character.

Mark Thornburg counts Fiddler on the Roof as one of his favorite musicals and is thrilled to be playing Tevye for the second time. The first, in 2006, marked his return to the stage after a 12 year hiatus to raise his family.

Jenny Priesman has not previously appeared on stage in Fiddler on the Roof, but did work backstage during the Playhouse’s 1993 production while members of her immediate family were on stage. Jenny, the hat maker’s wife, has a familial connection this time around as well. Her mother, Marion, plays Grandma Tzeitel and her father, Steve, is the stage manager.

The above cast members were asked questions about Fiddler on the Roof and their experience during rehearsals of this production. Below are the questions and their answers:

**Why do you think so many people (actors/audience) connect with Fiddler on the Roof?

Gary Bosanek- So many people connect with the show because of family traditions and lifestyles, especially when families have immigrated from the European countries. My father’s side of the family is of Polish/Russian/Czech descent, so many of the mannerisms were what I saw in my relatives as I was growing up. As an actor, I think the connection to Fiddler is that the cast becomes the village, and truly start to care about each other, through the rehearsals and performances, so that Anatevka comes to life.

Leanne Carlson- I think there are so many people that are intrigued by what humans can do to others. Fiddler on the Roof tells a beautiful, sad story with incredible humor, lets you fall in love with Tevye and his family, then makes you feel the pain of discrimination. It's something we can all learn from.

Christina Rohling- The play connects with every aspect of life - rebellion, conformity, relationships between generations, holding on to the past while trying to survive and adapt to the future. It encompasses every emotion from euphoria to despair.

Mark Thornburg- Fiddler’s story is essentially about dealing with and adjusting to change. The comforting message is that though there can be and will be much change in life; the faith, traditions, and culture that keep us grounded and comfort us will always be with us. Even when, (or perhaps especially when), the changes are dramatic, we realize that the really important things in life aren’t things at all. Faith, family, and traditions are what keep Tevye moving and coping with the changes and tragedy in his life. I think that’s a fairly familiar theme that we can all relate to.

Jenny Priesman- I think people connect with Fiddler because of the sense of family and tradition.

**What have you learned during this production of Fiddler that you have not learned in others?

Leanne Carlson- It is so interesting to continuously learn more about the Jewish/Russian lifestyle now and in the early 1900s. The Rabbi that came and spoke with us shed a lot of light on this issue. We're also learning a lot about our faith and the importance of the family bond. I think what hit home the most for me was learning how hard it would have been for Hodel to leave Anatevka in a time of such oppression....how dangerous that could have been for her, and how scary it must have been.

Mark Thornburg- This production has allowed me a great deal of time to “explore” more about what it means to be Tevye. We have a fabulous consultant in Rabbi Gross. He has been very gracious with his time and has given me more insight into what Tevye’s faith meant to him and how Tevye viewed his relationship with God. I also had the opportunity to read Sholem Aleichem’s Tevye the Dairyman which helped me understand the story behind the play. Having Susie Baer Collins give us so much detail and background into shtetl life and her history with this play has been an immeasurable asset also.

**What is your favorite scene in Fiddler?

Gary Bosanek- My favorite scene is the L’Chaim bar scene, because I’m playing Lazar Wolf. But, one of the most thrilling scenes is to stand and watch as the bottle dancers take the stage, and perform with their flexibility and precision. All 6 are brilliant!

Leanne Carlson- I love emotionally charged scenes, so the scene between Hodel & Tevye at the train station where she sings "Far From the Home I Love" and also the scene where Tevye sings "Chaveleh" are probably my favorites. Although I also love the power and statement of the first number, "Tradition".

Mark Thornburg- This is a nearly impossible question for me to answer. There are 3 key scenes involving my oldest three daughters that are very special to me. I have three daughters and it’s ironic that they each resemble and remind me of Tzeitel, Hodel, and Chava. No matter how old your children are, there will always be times that you only see the small child you once held in your arms. You comforted them when they cried, cried over when they left home, and agonized over the struggles or trials in their lives. Tevye, for all of his bluff and bluster, cannot help being completely absorbed by and with his love for his daughters. When he tells the stories of his life to Sholem Aleichem, his daughters are nearly everything that he discusses. The most moving scenes in the play for me are all about Tevye’s daughters and how they affect and impact his life.

Jenny Priesman- So far, my favorite scene in the show is "Tradition." It's such a wonderful opening number, and hearing this cast sing it is definitely a highlight of the show.


Since 1964, the story of Tevye and his five daughters has held meaning for actors and audiences alike. The Playhouse looks forward to sharing this special story with you. 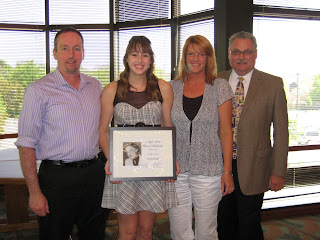 The Playhouse is proud of our Theatre Technology Apprenticeship Program® (TTAP®), working in educational partnership with Metro Community College. This unique school-to-work program allows high school and college students to learn the behind-the-scenes aspects of a career in technical theatre side-by-side with one of our excellent craftspeople. Once the apprentice successfully finishes the two-year program he or she is certificated by the U.S. Department of Labor, Bureau of Apprenticeship and Training; can continue college pursuits with up to 54 college credit hours earned from Metro College as part of the apprentice program and/or begin a career in the entertainment business.

Spring is always a fun time at OCP as we celebrate the graduation of our senior apprentice class. On Wednesday, May 12, 10 senior apprentices will participate in a graduation ceremony marking their achievements through the TTAP® program. One such student is Jamie Fields. Jamie says, “Being a part of the program has been the best learning experience I’ve ever had. It is a lot of hard work but it is definitely worth it…and it is fun!”

At the same event, the Playhouse will announce the recipients of TTAP® Scholarships for the 2010-11 year. The Joyce Gordon Memorial Scholarship is given to a Senior Metro College Apprentice in good standing who exhibits leadership qualities and a desire to make theatre his or her career. The Eleanor Jones Memorial Scholarship is given to a Senior Apprentice from high school who will be entering his or her second year of the program, exhibiting outstanding workmanship and above average dedication to school and Playhouse productions.

Implemented in the spring of 2006, the Theatre Arts Residency Projects were designed to provide opportunities for collaboration between the Omaha Community Playhouse and high school students. These projects were intended to bring themes or topics from current-season Playhouse productions to life through workshops in disciplines other than theatre arts.

Through these successful collaborations, students in social studies, history, cultural geography, government and political science classes have experienced the impact of live theatre and the ability it has to bring past and current issues and topics to life.

This spring, OCP worked with team of educators and teaching artists to create the "Far From the Home I Love” workshop series based on themes from Fiddler on the Roof. The three day series looks like this:

Day 1: Overview of Anti-Semitism: Students will learn about Anti-Semitism throughout history giving special attention to the time frame in which Fiddler takes place (Russia 1905)

Day 2: Fiddler on the Roof: Omaha Community Playhouse’s 2010 Spring Musical
Students will review the storyline of Fiddler on the Roof and view/discuss clips from the movie musical. These clips will highlight the relationship between the Jewish villagers and the Russian soldiers, Tevye’s struggle to keep his faith and traditions intact, and the expulsion of the villagers from their beloved home.

Day 3: Mock-Relocation Activity: Students will be confronted by modern day examples of restrictions that echo those forced onto the Jewish Community in Nazi Germany. From creating Identity Cards to making lists of what they will take with them when they are forced to leave their homes, the students will examine what traditions – physical, spiritual, religious and cultural - they are willing to let go of and what they are unwilling to compromise.

Led by teaching artists Amy Lane, John Lee, and Rita Paskowitz, this powerful series has impacted students in US History, World History, and Cultural Geography classes by bringing these themes to life through storytelling, multimedia tools, and thought-provoking interactive activities. At the conclusion of these workshops, participating students are invited to the opening weekend of the musical at no cost.

“…thank you so much for making this workshop opportunity available to our students!!! It was truly a great workshop experience for them. Amy and John were great connecting the story to the themes of the show, and Rita always impresses me--I love having her work with my students!”

The OCP Theatre Arts Residency Projects are generously funded through the support of Wells Fargo Bank of Nebraska.
Posted by Amanda at Monday, May 10, 2010 No comments: