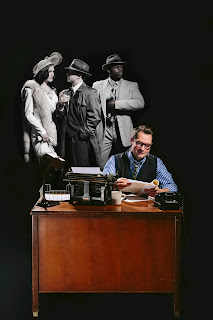 City of Angels: A Sexy, Film Noir-Style Story
When Hollywood calls to offer New York novelist Stine the opportunity to adapt his books into a film for the big screen, he packs up and moves to the home of sunsets, palm trees and stars. The story switches between the world of Hollywood and Stine’s in-progress script. While Stine’s movie plays out in black and white, Stine finds the enticements of Los Angeles—women, nightlife and the artistic negotiations to his script—a little much. City of Angels is a combination of classic film noir, drama and comedy all rolled into one musical experience.

City Shadows and Cigarettes
City of Angels embraces the popular style of film noir in the story that Stine writes, but what exactly is film noir? French for “film of the night” or “dark film,” the cinematic term is used to identify stylish Hollywood crime dramas, a main aspect found in City of Angels. These films usually focus on cynical attitudes, the shadows of urban city life, sexual motivations and, last but not least, smoking cigarettes. Other popular themes found in film noir can include:
•Neon signs
•Scenes appear dark, as if lit for night, with many dark shadows
•Rain-soaked streets
•Trench coats, fedoras, and a classy style

Two Worlds in one Story
Not only does City of Angels create a classic film noir style set in the late 1940s, it also focuses on two different worlds: Stine’s reality behind the typewriter and his creation shown in black and white. Two stories play out on the stage, one fiction and one real, while the whole story is enhanced with glamourous 1940s jazz music that perfectly fits the overall ambiance of the show. Its gritty, sometimes cynical characters and the thin line between fiction and reality are combined with moments of comedy that really make City of Angels a unique performance. 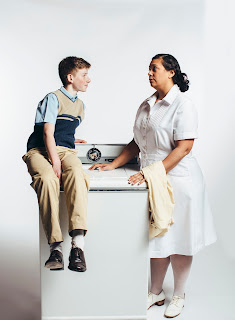 Posted by Omaha Community Playhouse at Monday, February 08, 2016 No comments: