Your Donation of Any Amount CAN Help the Playhouse!

Although I’ve been the development director for the past four years at the Omaha Community Playhouse, I have shied away from including any personal connections in our fundraising appeals, believing it more important to focus on the great organization that is OCP. My thought was that “it’s not about me, it’s about the Playhouse.” I still believe in principle that is and should be the case.

However, as I continue to talk to our supporters, it is becoming clear to me that we DO need to be talking about contributing to the Playhouse on a personal level because the majority of people still do not understand one of our core messages: donations of every size really do matter and make a difference.

This point was driven home to me recently as my very own mother apologized to me regarding the size of her donation. She, like many of our patrons, bought a season package and rounded up with a contribution to make her check an even $200. She then was surprised (and I believe a little embarrassed) when she received a thank you letter from me and a personal thank you call from Tim Schmad, our President. She told me “It wasn’t anything; you shouldn’t waste your time thanking me.” Unfortunately, we hear something similar from many of our donors.

You may have heard the saying “It takes a village…” The same is true of our friends at OCP. Yes, we need donors who can give more than $100. But we also need all those donors who give at whatever level they can. Both large and “small” gifts are significant to helping us provide our community with high-quality entertainment and educational opportunities.

Will you consider making a donation, of any amount, to OCP today? Click here to complete a secure online donation or feel free to send a check to my attention to 6915 Cass Street, Omaha, NE 68132. Thank you for your consideration and support.

Murder. Corruption. And all that jazz.

Based on the real lives of two women, Beulah Annan and Belva Gaertner, the Tony-winning musical Chicago is a nearly identical depiction of the historical court cases of the accused women. Their real-life accounts became a source of inspiration for reporter Maurine Dallas Watkins, who put the murderesses in the public eye, gaining them publicity and celebrity status. 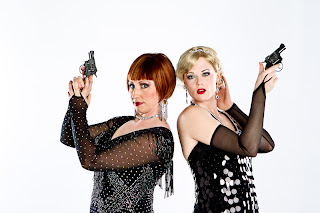 Beulah Annan, who is the inspiration for the character of Roxie Hart, was married to multi-millionaire Albert Annan. Beulah had an affair with laundry worker Harry Kalstedt whom she murdered in cold blood. Her defense took on many forms. She told stories of how Kalstedt threatened to leave her, how she shot him in self-defense and that she was pregnant. She was reported to have sat idly by, drinking a cocktail and listening to a record after his death.

Belva Gaertner was a famous cabaret singer, and the inspiration for character Velma Kelly, known for killing her lover Walter Law. The man was found slumped over the front seat of her car with a bottle of gin and a gun present. Belva claimed that he shot himself for she couldn’t remember the incident. Both women were acquitted which became a controversial issue in their day.

Years after their infamous trials, Watkin’s stories inspired her to write the storyline for the hit production of Chicago, forever immortalizing the ladies in a life of gin, glamour and jazz.

The character of Billy Flynn, a suave, cunning attorney who comes to the legal aid of Roxie, is based off of two prominent lawyers who practiced during the 1920s. Flynn and Roxie discover a way to dodge the bullet (no pun intended) and pull off a legal scheme so grandiose that it “razzle dazzles” the court. With justice on their side, Velma and Roxie ascend to new levels of notoriety as they pursue their vaudevillian aspirations. 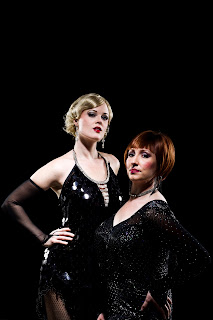 Director Carl Beck touched upon some elements and key components of the show that make for a dazzling performance. According to Beck, the OCP production of Chicago is an “incarnation of the original Bob Fosse 1970s production,” but is divergent from the stylized Broadway concert version. The feel of this production is a hybrid of historical authenticity tinged with nostalgia. Beck said the initial Fosse concept was attributed largely to vaudeville influence. Each signature number in the show is an homage paid to a vaudeville performer of that era. For instance, the character of Roxie Hart pays homage to late singer Sophie Tucker.

A celebration of femme fatale exploits and justice for the not-so-innocent, Chicago is the razzle dazzle, roaring 20s hit you won’t want to miss.

Posted by Omaha Community Playhouse at Friday, September 02, 2011 No comments: 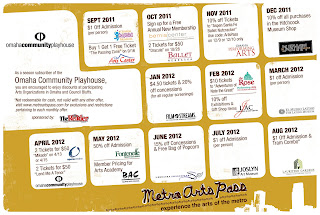 Enjoy the arts with a Metro Arts Pass! If you are a season subscriber to the Omaha Community Playhouse, in the month of September, you can receive $1 off admission at the Omaha Children's Museum. You can also receive a free ticket with the purchase of a ticket for The Passing Zone at The Arts Center at Iowa Western Community College on Sept. 16.

Posted by Omaha Community Playhouse at Thursday, September 01, 2011 No comments: