For years, Billy McGuigan and his brothers Ryan and Matthew have thrilled audiences around the country with their all-request Beatles tribute show, Yesterday and Today. Billy has had a successful and fulfilling career as a musician and entertainer, having created three critically acclaimed musical tribute shows. Every year fans are delighted with the return of the toe-tapping, sing along show Yesterday and Today to the Omaha Community Playhouse. One fan in particular, Kent Hanon, has been coming to Yesterday and Today on New Year's Eve for years to celebrate the holiday and watch his former students perform an energetic rendition of The Beatles' music. Kent taught Billy and his brothers drama at Bellevue East while they were in high school. 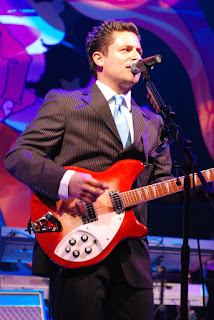 When asked what Billy was like when he was younger Kent said, “Billy, or Billy Mug, as I used to call him, was one talented and dedicated student. He wanted to be the best at everything he did, but he didn’t have an ego. Billy would be anything I needed him to be whether an actor, a singer, a musician or even a tap dancer.”

Billy wasn’t solely devoted to music as Kent explains, “He was more interested in acting when he was younger. Billy used to do stand-up at the Funny Bone and got cast in several musicals, which is how he eventually got his start in music. He had the natural ability and dedication to do almost anything. I always knew he was destined to do great things.”

Kent continues to describe Billy as “a natural showman who can be anyone you want him to be. Billy’s confidence and talent make him a great performer that audiences love. He has such a great rapport with his audiences because he is energetic, funny and knows how to keep them engaged.”

When asked why he attends the New Year's Eve performance of Yesterday and Today every year Kent explains, “There is no better way to ring in the new year than with Billy and his brothers rocking out to The Beatles music. It never gets old because every show is different. That’s the great part of a request show.” When describing the atmosphere on New Year's Eve, he says, “The show is loud and full of energy. A lot of the same people come back every year, so it’s fun to see familiar faces enjoy the show year after year.”

Kent is planning on attending Yesterday and Today again this New Year's Eve to see Billy and his brothers showcase their talent and their love for the Beatles music. 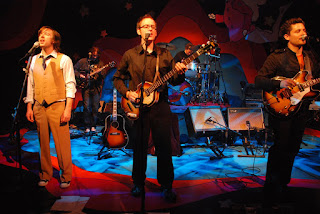 Be sure to catch this all-request Beatles tribute show as it will have you dancing in the aisles and singing along to every song. Share your stories and relive your memories with your favorite Beatles songs. No two shows are the same and every show is a guaranteed energetic and exhilarating time!

Back by popular demand, Omaha Community Playhouse's 21 & Over program is pleased to present Live Broadway Karaoke.

Monday, Jan. 7, 2013
7:30 p.m.
Omaha Community Playhouse
Scott Lobby
Free and open to the public, with an opportunity for donations. No tickets or reservations are necessary.

Check out clips of performers from two years ago here.

We’re back with Round 3 of our popular musical theatre showcase. We’ve got the piano, you’ve got the Broadway dream… Hosted once again by the incomparable .

The 21 & Over productions are intended for a mature audience and discretion is advised. For more information on 21 & Over and other OCP alternative programs, contact Amy Lane, resident director, at alane@omahaplayhouse.com or (402) 553-4890, ext. 164.

Posted by Omaha Community Playhouse at Tuesday, November 20, 2012 No comments:

I am a retired teacher from York and I traveled to Omaha in September to audition for A CHRISTMAS CAROL. Imagine my surprise and elation when I received a call saying the Playhouse would like for me to join the cast as Marley. But in the back of my mind, I must confess, I wondered how I would be received in Omaha, if I would be viewed as an outsider, perhaps even sense a bit of resentment from a few along the way. I am pleased to report that I have been warmly welcomed into the circle of cast and staff. Everyone has treated me kindly and patiently and graciously and enthusiastically, and even helped me find housing during my time in Omaha. That first open cast meeting when I saw children of all ages returning and greeting each other with smiles and laughter and warm embraces, I realized this is not just a cast of just another show, but a family that looks forward to joining together to celebrate this unique experience. And now I get to become a part of that family, and I am feeling so lucky, so fortunate to be included.

Posted by Omaha Community Playhouse at Friday, November 16, 2012 No comments:

A Behind the Scenes Look at A Christmas Carol

A Christmas Carol has been a beloved holiday tradition at the Omaha Community Playhouse for 37 years. Families across the country are drawn every year to this magical production of Charles Dickens' classic Christmas story. Have you ever wondered how A Christmas Carol comes together every year? The process is long and complex and requires the help of an experienced and dedicated production staff. Last year NET filmed the entire process and is airing the special one-hour documentary “From Casting Call To Curtain Call” on Friday, November 16.

A Christmas Carol is a huge undertaking every year. Not only does OCP produce its Mainstage production but it also puts on touring versions through the professional touring arm, the Nebraska Theatre Caravan. October and November are a few of the busiest months of the year, as the production staff works diligently to coordinate the precisely choreographed rehearsal schedules of multiple full scale productions. NET documented every aspect of the Mainstage process by filming auditions, rehearsals and performances up until closing night. The documentary features interviews and special commentary from Directors Carl Beck, Susie Collins and Amy Lane, Musical Director Jim Boggess and Stage Manager Jeanne Shelton. Cast members share their thoughts on the production process and how they work to provide the same level of authenticity to their characters as in past years. For some, it is their first year; for others, it is their 25th year. Nonetheless they must all work together to create the memorable characters and scenes that make A Christmas Carol a true holiday classic. Nearly one hundred people, mostly volunteers, make these shows come to life. While A Christmas Carol may be a complex production, experienced staff members and a dedicated team of volunteers make the process work like clockwork. After Jerry Longe takes the last bow as Ebenezer Scrooge on closing night, the sets get torn down, props get stored and costumes get put aways until next year.

See A Christmas Carol this holiday season, and watch as Ebenezer Scrooge takes us on a life-changing journey filled with beautiful costumes, exquisite music, perfectly crafted sets and special effects second to none. Perfect for the whole family! Be sure to check out the NET documentary: “Casting Call to Curtain Call” on Friday November 16, to catch an in-depth look at the making of A Christmas Carol.

1,000th Performance of A Christmas Carol 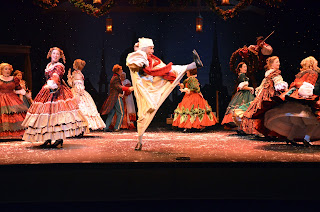 Time to celebrate! Friday, November 30, 2012 marks the 1,000th performance of A Christmas Carol at the Omaha Community Playhouse. Former cast and crew members are invited to attend the show for $25. For this special discount, contact the OCP Box Office at (402) 553-0800.
Posted by Omaha Community Playhouse at Thursday, November 01, 2012 No comments:

Enjoy the arts with a Metro Arts and Culture Pass! If you are a season subscriber to the Omaha Community Playhouse, in the month of November, you can receive 10% off tickets to Aspen Santa Fe Ballet's "Nutcracker" through Omaha Performing Arts. You can also receive $1 off admission at Strategic Air and Space Museum.